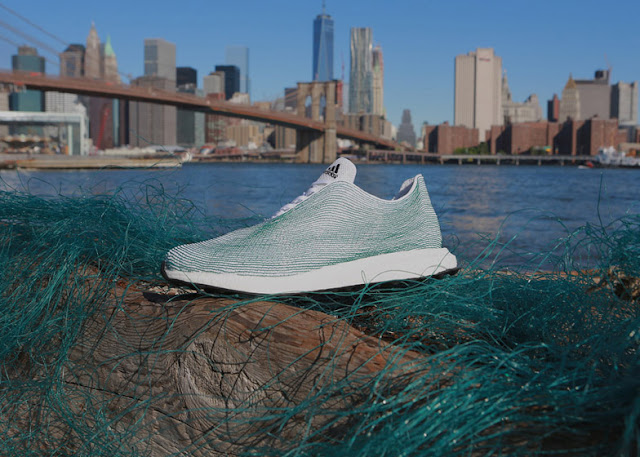 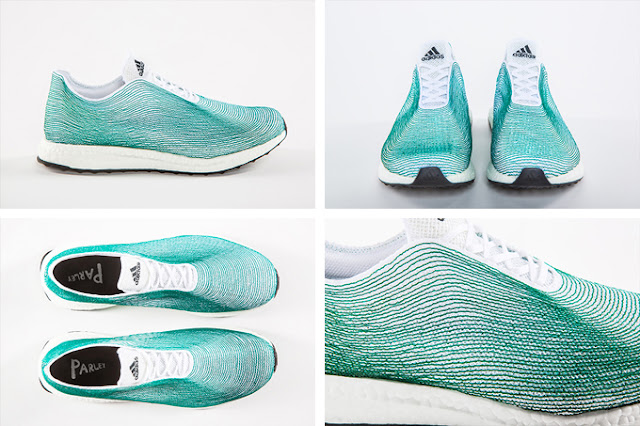 Sportswear brand Adidas has launched a prototype shoe with an upper made entirely from yarns and filaments produced using plastic salvaged from the ocean.

British designer Alexander Taylor's running shoe for Adidas was unveiled during an event last week for Parley for the Oceans – an initiative that encourages creatives to repurpose ocean waste and raise awareness of the growing environmental issue.

"This way there is no reason why materials with similar characteristics to those that we use every day with conventional production processes cannot be simply replaced by ocean plastic materials," Taylor told Dezeen.

"It is really much more a case of working with specialist 'green' chemists and companies such as Bionic textile to build new materials by re-constituting and re-engineering the nets and plastics."

The German sportswear brand plans to launch the concept design as part of a wider range of sportswear next year, but is currently looking into other sustainable ways of manufacturing the collection.

"It is important to understand that this is a concept shoe and it is currently utilising absolutely new materials and processes, which over the coming months will be worked on, refined and up-scaled into consumer product," said Taylor, who also designed the limited-edition AdiZero Primeknit trainers for Adidas in 2012.

"The shoes are manufactured using the very latest in automated textile technology and more will follow in the coming months around the new technology side of the project."

The nets that were used for the upper part of the Ultra-Boost-style shoe were retrieved by Parley for the Oceans partner organisation Sea Shepherd, during a 110-day expedition tracking an illegal poaching vessel off the coast of West Africa.

Adidas revealed the designs during a talk titled "Oceans. Climate. Life", hosted at the United Nations headquarters in New York.

The brand also announced its plans to raise awareness about the state of the seas with a sustainable collection made from the reclaimed waste, in further collaboration with Parley for the Oceans – a UN-backed scheme.

"Adidas has long been a leader in sustainability, but this partnership allows us to tap into new areas and create innovative materials and products for our athletes," Adidas executive board member Eric Liedtke said at the event.

The announcement follows Adidas' sustainability plan, which includes their recent decision to phase out plastic bags in all retail stores.

There is currently no fixed release date for the shoes, but Adidas has scheduled the launch for spring 2016.

Other companies involved in the Parley programme include Dutch fashion brand G-Star, which worked with musician Pharell Williams to launch a clothing range made entirely from waste ocean plastic.

A project that aims to clear the oceans of their plastic islands using floating barriers won the Digital category at the 2015 Design of the Year awards.

Music producer Will.i.am has also experimented with recycled plastic bottles and aluminium for a collection of products for Harrods that launched in March 2015.