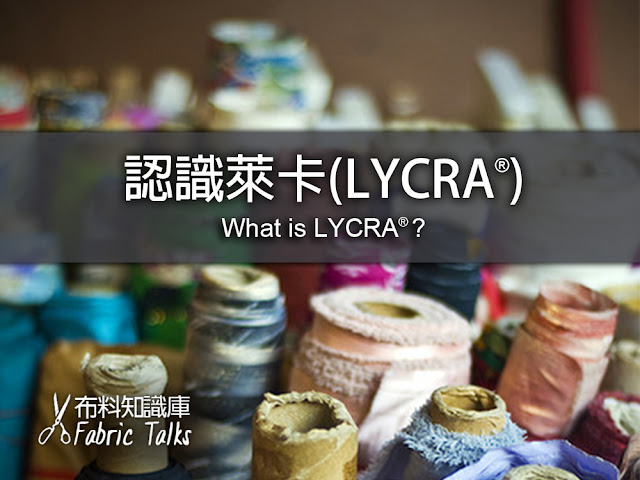 Lycra is a brand name for elastane, which is a highly elastic synthetic fabric. Despite having different names, Lycra, spandex, and elastane are all the same material, and these fabrics can stretch to 5-8 times their usual size.

This fabric was originally developed by the DuPont Corporation in the 1950s, but it would not exist if polyurethane had not been invented by IG Farben in the 1930s in Nazi Germany. Polyurethane now represents the base material for a number of different plastics, and the same basic chemical synthesis methods are used to make Lycra that are used to make other polyurethane-based plastics.

Like other polyurethane materials, Lycra fabric is a polymer, which means that it is composed of long chains of monomers that are connected with a special type of acid. Unlike many other types of synthetic fabrics, Lycra is highly resistant to heat, and it was quickly recognized as an excellent addition to heat-sensitive synthetics like polyester and nylon.

Polyurethane was originally developed by IG Farben as an alternative to rubber, and as soon as this substance was synthesized, its ability to absorb heat and kinetic energy was also noted, and polyurethane is commonly used in various forms of insulation to this day. Many of the key scientists at IG Farben were imported into the United States after World War II, and a variety of these scientists started working at DuPont.

This collaboration between German scientists and DuPont's massive industrial might gave rise to a number of different useful inventions, and Lycra is one innovation that has had a particularly long-lasting impact on the world economy and consumer lifestyles in developed and developing nations. Lycra and similar fibers remain highly popular throughout the world, and even though this type of fabric can have a significantly negative environmental impact after it is produced, it's unlikely that the popularity of Lycra will decline in the foreseeable future.

How Is Lycra Fabric Made?

Lycra is a fully synthetic fiber, which means that all of its components are created in laboratory settings. While many of the constituent parts that are used to create the chemicals in Lycra fabric have organic origins, by the time that they are formed into Lycra fibers, they have been formulated and reformulated to the extent that they have no relation to organic components.

There are four ways to make Lycra, but most of these methods have been almost entirely discarded. While some manufacturers may still use reaction spinning, solution wet spinning, or melt extrusion to make elastane products, a method known as solution dry spinning makes up almost 95 percent of global Lycra production.

This process begins when macroglycol and a diisocyanate monomer are mixed to create the prepolymer that serves as the base ingredient of Lycra. Next, the solution is exposed to minutely calibrated levels of heat and pressure, which instigates the chemical reaction that forms the prepolymer. If the volume ratio between these two substances is out of balance, the prepolymer will not form, and a ration of 1:2 is observed in most applications.

The prepolymer is then exposed to diamine acid, which produces another chemical reaction called chain extrusion reaction. The substance that results from this reaction is thick and viscous to the point of being sludge-like, so a solvent is then used to thin the solution and make it easier to work with.

Next, the thinned solution is loaded into a cylindrical machine called a fiber production cell. This machine contains a specialized type of spinneret, and once the solution is loaded, the fiber production cell begins to spin, which forces the solution through the spinneret. The solution comes out the other side of the spinneret in the form of fibers, but these fibers still must be exposed to a heated nitrogen and solvent gas solution before they transition from a liquid into a solid state.


Once they are solid, the fibers can be extruded from the cylindrical spinning cell, and they are then formed into strands with a compressed air device. This high-pressure air also twists the strands, and the resulting yarn can be formed in a variety of different sizes to fill the various uses of Lycra in the consumer textile industry.

Before Lycra yarn can leave the factory floor and be woven into fabric, it still needs to be exposed to a finishing agent consisting of magnesium stearate or a similar polymer. Lastly, the Lycra yarn is transferred to a large spool, and it is shipped out to a textile manufacturing plant.

How Is Lycra Fabric Used?

Lycra is used in a wide variety of different forms of consumer textiles. Since the early days of Lycra fabric production, the incredible elasticity of this substance has been noted as being highly desirable in certain consumer apparel markets, but elastane fabrics are very rarely marketed on their own.

Instead, this fabric is usually woven into other types of textiles to increase their overall elasticity. If a small amount of spandex is woven into polyester, cotton, or wool, for instance, these fabrics become much more elastic. In determining the increased elasticity that will be noted in fabrics once elastane is introduced, textile manufacturers keep in mind that this fabric stretches up to eight times its original size. Therefore, if 10 percent spandex is included in an otherwise rigid textile, it should be able to stretch to roughly twice its original size.

Lycra is most popular in types of garments that are form-fitting. It is, for instance, commonly used in sheer underwear for men and women; most types of undergarments that ride close to the skin contain at least some amount of this substance. Even boxer briefs for men, which are typically baggy, include some amount of spandex in their waistbands to help them fit tightly around the abdomen.


This fabric is also commonly found in the waistbands of sweatpants, loungewear, or any other types of underwear or bottoms that are designed to be stretchy. Beyond waistbands, Lycra is used in most types of socks; without the presence of this substance, socks would be significantly less stretchy, and they would be harder to put on and remove.

In addition, almost every type of sportswear contains at least some amount of Lycra. Apparel used while biking, hiking, or swimming is usually designed to ride close to the skin, and elastane enables these types of clothes to be tight-fitting without causing discomfort.

Even though Lycra differs from nylon in that it isn't made into plastics, this fabric does have a place in at least one industrial application. Actors in the film industry sometimes wear types of apparel called motion capture suits, and these suits are designed to cling to every part of the body. When positioned in front of a green screen, motion capture suits allow film producers to insert three-dimensional characters that look incredibly realistic.

Where Is Lycra Fabric Produced?

Lycra is a trademark of DuPont, and it is only made by this international corporation. DuPont has manufacturing locations in more than 90 countries, which means that this fabric could be made in any number of areas around the world.

Overall, the international spandex industry has shifted eastward in the last few decades as China has risen to the fore as the dominant manufacturing power in the world. DuPont has a number of factories in China, and many other companies also manufacture spandex in this country.

The future of Lycra fabric production around the world looks bright. A ReportBuyer report from 2018 indicates that this fabric will continue to be made in greater and greater quantities until at least 2023, and all signs indicate that this production boom will continue far past this projected date.

How Much Does Lycra Fabric Cost?

Lycra and similar fabrics can command relatively high prices on the international market due to their unique elasticity attributes. Textile producers are willing to pay more for elastane fabrics due to their extraordinary stretchiness, and the relatively elaborate process used to manufacture these fabrics also drives prices upward.


While market fluctuations still affect the price of Lycra fabric, the novelty and unique versatility of elastane cause the cost of this textile to be significantly higher than other synthetic fabrics like polyester and nylon. Since this fabric is used in such small quantities in most consumer goods, the relatively high cost of Lycra isn't felt very frequently at the consumer level. However, the more Lycra that a garment contains, the more it costs, and ballet outfits and cycling gear made with high percentages of this fabric are generally quite expensive.

What Different Types of Lycra Fabric Are There?

Aside from the varied manufacturing processes that can be used to make this fabric, there are no distinct differences between Lycra, elastane, and spandex. It is, however, important to know more about each term:

Lycra: As a registered trademark of the DuPont corporation, the "Lycra" brand is one of the most reliable and high-quality forms of elastane fabric on the market. However, elastane that has been branded as Lycra can sometimes cost more than other types of spandex.
Elastane: The term "elastane" is most commonly used in Europe, and each continental European language has a slightly different version of this word. Elastane is the most technically correct term used to describe these polyether-polyurea copolymer fabrics.
Spandex: Despite the persistence of a common misconception, spandex is not a registered trademark of any company. Instead, it is the term that DuPont originally used to describe their polyurethane fabric during the development process. "Spandex" is an anagram of "expands," and the attractive simplicity of this name has made it the preferred term for referring to elastane products in the United States and elsewhere.
How Does Lycra Fabric Impact the Environment?
The production of Lycra is not considered to be inherently detrimental to the environment. While it's true that the production of elastane fabrics requires high levels of energy and the use of a variety of toxic chemicals, unlike fabrics like nylon, the raw ingredients for Lycra are not derived from non-renewable resources like petroleum oil.

Instead, these ingredients are fully synthesized in laboratory settings, and DuPont is one of the world's leaders in sustainable and safe elastane manufacturing processes. There's no getting around the fact that the production of Lycra involves carcinogenic chemicals, but scientific research has indicated that elastane factory workers in Sweden exhibit negligibly greater cancer risk, which seems to indicate that workplaces in which this material is made are not very hazardous. No studies have been done, however, to examine the impact of elastane production on workers in other countries.

Polyurethane has been noted to contain isocyanates, which are carcinogenic chemicals that can cause respiratory issues in children and adults. While it's possible that spandex also contains these harmful chemicals, the presence of isocyanates in this fabric has not been confirmed.

While the process of creating Lycra is not notably bad for the environment, this fabric is significantly detrimental to environmental health after it is sold to consumers. Research has determined that 60 percent of the trash present in waterways is composed of non-biodegradable fabric fibers, and Lycra doesn't biodegrade. Even if apparel containing this fabric is disposed of responsibly, consumers contribute to this pollution issue whenever they wash their Lycra clothing; elastane fibers break off with every washing and contaminate the water supply.

It may take thousands or even millions of years for all of the world's Lycra to biodegrade. In the meantime, giant trash islands made from textiles and other plastics continue to grow in many of the world's oceans.

Under certain circumstances, it may be possible to receive Global Recycled Standard (GRS) certification for Lycra and related fabrics. To date, DuPont has not pursued this form of certification for its Lycra brand, but a variety of other companies around the world have done their best to use only recycled materials to make their spandex products. It's important to note, however, that recycled spandex is just as harmful to the environment as new spandex.