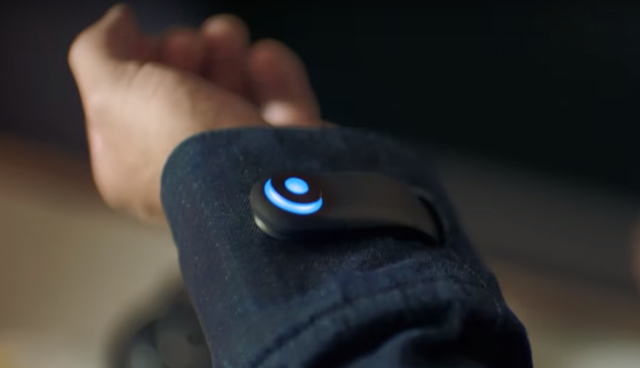 It’s called the Levi’s Commuter Trucker jacket with Jacquard by Google (yep, it’s a bit of a mouthful, but maybe not by smartphone standards), and at first glance, you might not notice anything unique about it. You’d almost be right on that front — at its core, it’s a pretty standard Levi’s denim jacket. But there’s one really big difference: the high-tech capacitive cuff.

This cuff is where Google’s Project Jacquard tech lives. There’s two main pieces to Jacquard: the fabric itself, and the tag.

The fabric is a crazy new technology that took years for Google to figure out. Disrupting the centuries-old process for weaving fabrics, Google and Levi’s figured out a way to get capacitive threads — which basically sense touch the same way a capacitive screen would on a phone — into the fabric so that you can touch it and have that actually do something.

It’s tempting to think that’s a simple feat, but there’s a lot to consider here. This is a piece of clothing, remember, so it would probably be best if those threads didn’t stick out like a sore thumb and make an otherwise fashionable jacket appear like a college kid’s homebrew hack. But it would also be ideal if those threads can be felt so that the user knows where to swipe and touch it. As you can see in the shots I took at SXSW earlier this year, Google has been thoughtful about how it does this.

Oh, and the capacitive fabric needs to be durable and washable so that owning this jacket in particular doesn’t bring annoying inconveniences. Yes, Google and Levi’s wanted to make this a really cool high-tech jacket, but they didn’t want the tech to get in the way the same way a charge-every-day smartwatch would — the goal was to make the touchable fabric feel native.

Generally, I think Google accomplished this. After having worn the jacket for a couple weeks, there have been many times that I’ve forgotten it’s a smart jacket entirely. You might think that would raise concern about the jacket’s usefulness — which, for some people with certain lifestyles, is a justified concern — but I see it as a good thing. Unlike other devices which need to be charged every day, I’ve been able to incorporate the jacket into my life and forget it’s there.

I’m desensitized at this point since I’ve been a fan of the tech for years, but almost everyone I’ve shown this to in person is blown away that it’s a real thing. In a world of smartwatches and smartphones, it’s a real, working consumer product that everyone can actually buy that breaks the mold. Just on that merit alone, I’m a huge fan.

Unfortunately, with current technological limitations, it wasn’t feasible — for now, and at this price point — to embed in the fabric everything required to make this jacket work. To sync the touchable fabric up with your phone, you need a Bluetooth receiver and some electronics, which Google houses in what it’s calling the Jacquard Tag.

The Tag is really the only reason you know that this is a smart jacket. For one, you can feel that it’s there. It’s about 5-or-so inches long and tucks inside the right cuff and connects to a port that connects to the capacitive fabric. On the other end there’s a USB-A connector that you use to charge the thing. Despite it existing, I think it looks really nice.

While changing songs and getting notified for calls is probably going to be one of the main use cases, it’s not the only thing you can do. In addition you can also ask what’s currently playing, what time it is, or ask for directions and an ETA. You can also swipe the cuff to count things, like how many puppies you saw on your ride or how many glasses of water you’ve had.

This is my first time ever doing anything that gets close to being a fashion product review, but for me and my style — this jacket is awesome. I love it. I ride my bike a lot, so I really appreciate a lot of the little touches that Google and Levi’s have added. The jacket has small reflectors on the back so it’s easier to be seen at night, and it has an extended back that hangs down to give you some more length when when you’re hunched over your bike.

I don’t really have anything else to say about the jacket itself, really. I have always liked Levi’s (I pretty much exclusively wear Levi’s jeans as my pant of choice), and I’m happy with the jacket as well. Functionally, it does a good job of keeping me warm in the few weeks out of the year that it gets below 50 degrees Fahrenheit here in Texas.

The jacket retails for $350, and for the gadget-minded individual that’s likely to be reading this review right now, that might seem steep considering its relatively limited functionality in comparison to other “smart wearables” in that price range. But I think it’s best to throw out that comparison because 1) this is brand new technology that’s only available here and 2) it’s meant to be philosophically different from a smartwatch or any other wearable you might compare it to.

And while I know not everyone would share this perspective, I’ve been mostly uncompelled by most wearables. I’ve felt hindered by every smartwatch I’ve tried, not because they’re not cool gadgets, but because, if anything, I want less “technology” in my life. My life is so consumed in my phone and my notifications and my social media that I don’t need — nor do I want — another device that brings all of that closer to my eyeballs (looking at you, Glass) or my wrist.

It’s admittedly a niche use case, but as a cyclist myself and someone who wants the advantages of wearable tech without the distraction, I’ve been happier with this $350 jacket than I have been with any smartwatch I’ve owned. No, it can’t “do” half the things a smartwatch can do, but it does a few things really well. It’s really nice to swipe on your cuff to change tracks instead of fiddling around with a tiny smartwatch screen. It’s awesome to tap your cuff and get the current time in your headphones.

And most of the time, I don’t have to worry about whether or not its battery is charged. I just wear the jacket like I would wear any other piece of clothing. When it’s there, it’s there to be used. When it’s not, it’s not. It’s great.

The most compelling smartwatch use cases for me have been notifications (which I want less of), getting the time (like any watch can do), and simple controls for things like music while driving. For me, the Jacquard jacket does notifications better (only subtle notifications when a specific, important person is trying to get ahold of me), getting the time better (one swipe away from having it read aloud), and music control better (no fiddling with a tiny screen with tiny touch targets).

So if you’re like me (and especially if you’re a cyclist and can appreciate the benefits of the jacket’s design itself), I think you’d also be happy with the jacket. Again, $350 might seem like a lot for something that’s “limited” in features, but for me it’s less about how many features a product has and more about how useful those features actually are.

I think that this product deserves more than to be compared against every other smart thing. I know that the thought of a “smart jacket” might be a joke in an age when “smart” versions of everything are popping up, but I think Google and Levi’s actually did a really good job here. Three hundred and fifty dollars, again, might seem like a huge price tag, but it’s worth remembering this jacket is sold in shops next to name brand jackets that might sell for three thousand five hundred dollars.

I know that I’m basically the target market for a product like this (I ride my bike a lot, I’m obviously a huge fan of Google, I like smart products, I’m annoyed with current wearables, and I’ve been wearing Levi’s jeans my whole life), but I’d say this is, for anyone that can appreciate this kind of thing, an awesome first attempt at a new way to interact with our devices. Google spent years trying to turn this into a consumer product, and actually followed through. For them, that’s saying something.

For those that aren’t cyclists, well, this is a really nice jacket — and it’s probably the only piece of clothing you can buy right now that will get OTA updates for added features in the future. If that’s your thing, then this jacket might be a good addition to your closet this winter. The version without the smart stuff costs $150, so an extra $200 for this seems more than justified.

You can grab the jacket at Levi’s website for $350, and of course, it’s not restricted to Android devices. It plays well with iOS (I tested it, just to make sure), and the music streaming and “What’s Playing” functionality works with all the top streaming services. You can download the app for the jacket over at the Play Store or the App Store.