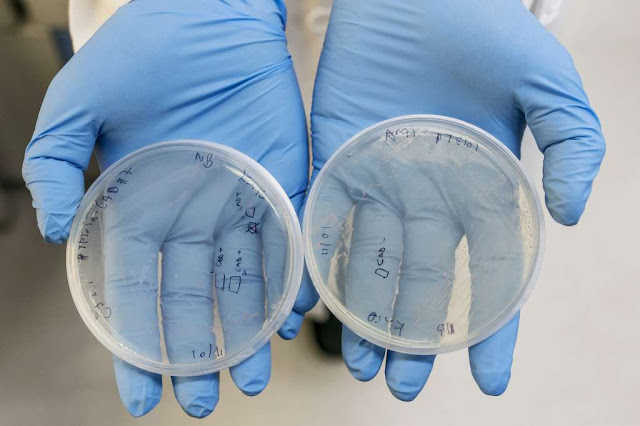 In a Hong Kong laboratory, researchers are working with one of the world's biggest cloth makers to improve its production process using a special ingredient: Bacteria.

TAL Apparel, which has factories in mainland China and Southeast Asia, has teamed up with City University to identify bacteria that can clean up more efficiently the vast quantities of waste water the textile industry produces. It's one of hundreds of efforts by China's private and state-owned companies to fix a problem that could end up rewriting the playbook of the global fashion industry.

After decades of almost unbridled industrial growth that left China with a legacy of rampant pollution, shrinking aquifers and soaring water prices, the government is cracking down on big industrial users, and the textile industry is in the front line. Cloth-making ranks third in China for the amount of waste water it discharges - 3 billion tons a year - after chemicals and paper, according to a 2015 report by New York-based non-profit group Natural Resources Defense Council, which has an office in Beijing.

The price of ensuring a sustainable water supply in China is yet another expense for factories that are already being squeezed by higher land and labor costs. And while automation and overseas production offer some respite, China's companies are turning to other technologies to preserve operating margins that, even for major players such as Crystal International Group, can be less than 10 percent.

In 2015, the government released its Water Ten Plan, ushering in stricter waste-water regulations. It sets out 10 general measures to control pollution discharge, promote technology and strengthen water management, with a 2020 deadline to meet its goals. The stricter water rules are part of China's actions to increase enforcement in environmental measures. Penalties for environmental violations by the country's manufacturers rose 34 percent in 2015, from the previous year, according to China Water Risk, a Hong Kong-based non-profit organization focusing on disclosing risks related to China's water resources.

The clean-up goes to the heart of an industry that leveraged decades of cheap labor and capital, and a unique close-knit supply chain of cloth, dyeing, sewing, fasteners, trimmings, labels and logistics, to deliver so-called fast fashion - rapidly shifting style from the catwalk to the mass market at prices that make garments almost a disposable commodity.

"Customers are happy because clothes are even cheaper than a decade ago, and retailers can benefit from low costs," said Felix Chung, a Hong Kong legislator representing the textile industry. "But the result is massive waste - and the brands will need to pay for it in the future."

With that model coming under fire for its environmental record, top brands like H&M Hennes & Mauritz, Target Corp. and Gap have adopted water quality standards for their suppliers and monitor them to protect their reputation with consumers. Owners of brands including H&M, Zara, Nike and Adidas are among those that have committed to achieve zero discharge of hazardous chemicals in production by 2020.

The problem is how to achieve better environment and labor standards without raising prices for consumers who have become addicted to cheap fashion.

"We talk about social responsibility, but people are not willing to pay for it," said TAL's chairman Harry Lee. "Stricter regulation requires manufacturers to upgrade their facilities. It's good, but it requires capital."

TAL, which opened its first factory in mainland China in 1994, had been buying bacteria from other labs to treat water used in washing cloth. Using bacteria instead of chemicals to digest organic compounds can cut the amount of waste sludge generated by as much as 80 percent and enables 100 percent of the water to be recycled in the plant.

During a production halt during the week-long Chinese New Year break this year, the bacteria in its system died, so TAL set up a research program that is using DNA sequencing to find a "superbacteria" that would be cheaper and more efficient, Lee said.

But researching and upgrading technology is expensive. For many smaller suppliers on wafer-thin margins, it's money they don't have. In a June-July survey of 85 Chinese textile manufacturers by China Water Risk, more than half those polled said they have invested at least 2 million yuan to upgrade their factories - equivalent to almost 40 percent of the average annual profit for a small textile company in 2012. More than a quarter of the suppliers said the effort had increased operating costs by between 20 percent and 40 percent. Fourteen percent felt they may face the risk of having to shut down.

The day is coming when retailers will have to adjust their retail prices as manufacturers cannot continue to absorb the costs of compliance. "There are clear questions around the long-term business model, especially around potential cost-sharing by brands and consumers," said Dawn McGregor, a Hong-Kong based manager at China Water Risk. "We've already seen manufacturers shutting down and consolidating, which means less choice and higher prices for brands."

The big retail brands are also playing a part in trying to develop techniques that would cut costs and allow the industry to be less wasteful.

H&M Foundation, a non-profit organization under the Stefan Persson family, founders and main owners of H&M group, announced this September that research with its partner, the Hong Kong Research Institute of Textiles and Apparel, had developed a chemical process that could recyle blended textiles into new fabrics and yarns. The foundation offered a 1 million euro award this year to encourage ideas for a more sustainable way to use resources in the fashion industry.

At the Hong Kong lab, scientists hope to develop their superbacteria within two years. If they succeed, TAL will share the results with other manufacturers, Lee said.

"Hopefully more factories will be willing to use it," said Lee, "But it's a very slow process."