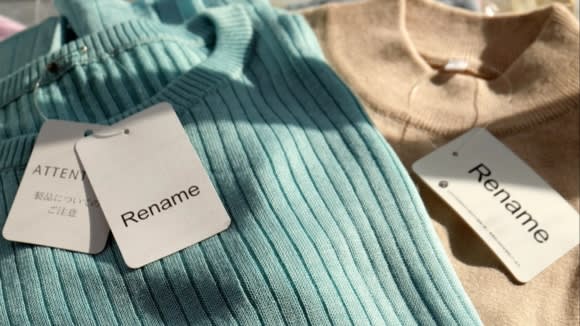 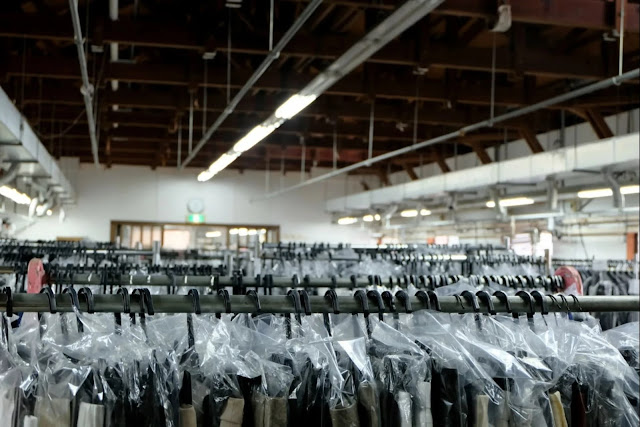 Nagoya company sells brand-name clothing under new label
Each year in Japan, more than 1.5 billion items of clothing are left to languish in stockrooms and the warehouses after failing to catch the eye of the country's legions of discerning fashionistas.

Many designer labels refuse to sell the leftover clothes at a deep discount to avoid giving a cheap image to their brand. Instead, they opt to destroy the inventory.

But Yukari Kato, the 36-year-old CEO and co-founder of Nagoya-based apparel seller Fine, has flipped the script on this wasteful practice with a simple solution: rip out the labels and sell the clothes under her company's brand.

"I wanted to resolve in some way the waste that was happening before my eyes," Kato said. "I ran with that singular thought in mind, and before I knew it I arrived at this business."

Unsold clothing from various designers pack row upon row of racks at a Fine factory in Nara, a city close to Osaka. But calling the facility a factory is a bit of a misnomer since no clothes are altered or made from scratch.

Workers instead remove brand labels from the original clothing, along with the wash care tags, and sew on labels bearing the company's own in-house brand: Rename.

The clothes are sold at a discount in retail outlets nationwide and online. By anonymizing the original brands, designer labels get to maintain their exclusivity and value.

Kato ended up in the apparel industry almost completely by happenstance. "I was originally a normal girl who liked fashion," she said.

After graduating college, Kato worked in sales at a home seller. That changed in 2008 when a friend invited her to be the co-founder of Fine.

At first, the company had nothing to do with clothes. It sold CDs and DVDs at a time when auction sites such as Yahoo Auctions were thriving. The company grew steadily and eventually opened physical branches in the Tokyo area and in the Kyushu region further south.

However, in 2011, Fine unknowingly procured pirated versions of discs and sold them to a client. It turned out to be a costly error since trust is paramount in the secondhand industry.

Immediately following that misstep, sales plunged by two-thirds. Kato's partner departed Fine, leaving her and the company saddled with debt.

"All I could think about day and night were the finances," Kato recalled.

"I think it was around 2013," said Kato, recalling her first visit to a wholesale shop in Osaka to procure inventory. Brands that she admired as a college student were found in bargain bins priced at the equivalent of a few dollars each.

There is little retailers can do with unsold brand-name apparel that has gone out of fashion. First there are standard sales. If that doesn't work, the leftovers are sent to outlet stores where the price is marked down further.

If clothes still fail to sell, retailers have little choice but to sell them at rock-bottom rates to discounters or destroy them. A total of 2.9 billion items of clothing went on store shelves last year, data from Kojima Fashion Marketing shows. Just 1.36 billion were purchased, leaving more than 1.5 billion unsold items of dead stock.

Kato began to wonder whether something could be done to reduce the amount of clothing waste -- whether the leftovers could find a second life with some fresh marketing.

As she searched for a supplier, a representative at an apparel company told her: "If you remove the tags and treat them as secondhand, we can sell to you."

If a company's clothing is put on the market elsewhere for cheap -- even if it failed to sell in-store in the first place -- its brand risks being devalued. But if consumers believe that the lower price is because the item has been used, then the legitimacy of the original price is preserved.

At first, Kato questioned whether customers would buy clothes without a brand name attached.

She tried listing items on Yahoo Auctions as "a 109 brand," referring to Shibuya 109, a trendy Tokyo department store catering to teenage and 20-something women. She got few takers.

Figuring that 109 might not have resonated with the relatively older Yahoo Auctions user base, Kato tried hiding the brand. The clothes sold.

Kato came to believe that some people shun certain clothes simply because of the brand, and that consumers often look at brands with a bias that blinds them to the innate value of the clothing itself. That led her to launch Rename.

Three years later, the company has sold more than 300,000 items.

When Kato launched the business in 2016, nearly all the manufacturers and department stores she contacted about buying their unsold inventory refused. But "lately they have started to contact me," she said.

For the year through September, Rename's purchases jumped 170% on the year by value, spanning more than 200 brands.

Last year, British brand Burberry touched off a firestorm of controversy when it was reported that it had burned $38 million worth of unsold stock, including clothing and accessories, to protect its brand.

At a time when companies face mounting questions about social responsibility and ethical consumption is gaining more followers, one might think that the apparel industry's views on dead stock, long shrugged off as a necessary evil, are changing.

Yet President Shoichi Yamamoto of Shoichi, an Osaka-based pioneer in the inventory liquidation business, says his business will "never go away."

"That's why I started [the company], and my thinking hasn't changed," he said.

Shoichi handles 10 million articles of clothing a year. "We have the top market share," Yamamoto said.

About 300,000 items are piled high at the company's warehouse in Osaka, located at a former ironworks. Another three to four trucks' worth of clothing is delivered there each day.

"Isn't it a wonderful thing to be able to choose clothes based on how you feel or what you like?" Yamamoto said. But he added that whenever there are multiple options, some inevitably do not get picked.

He believes it is more realistic to find a good use for unsold clothes than to reduce the leftovers. "If you don't want inventory, you need to make everything to order," he said. "But that would be prohibitively expensive. No one will be able to buy any clothes."

Yamamoto wants apparel makers to continue making fashionable products, so he always buys his own clothes at full price. "I truly respect the people who develop products at clothing brands," he said.

As an extension of this respect, he does not want designers to worry about unsold inventory. He considers it his duty to take care of the problem. Over the years, he has collected calling cards of executives from all corners of the clothing industry, from manufacturers to department stores.

Both Kato and Yamamoto have created a growing business out of leftover clothing. But their very existence is also a sign of the tough environment faced by the Japan's apparel industry.